skip to main | skip to sidebar

Endgame is the graduation show of MA Contemporary Fine Art students from Sheffield Hallam University. The exhibition brings together a diversity of artistic practice, ranging from video, text-based, drawing and sculpture. Starting with familiar or overlooked aspects of everyday life all five artists express a desire to connect with and reinterpret the world around them. The endgame of their MA is played out against an absurd backdrop of the outmoded, the neglected and the resurrected. 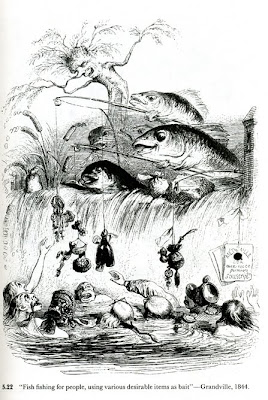 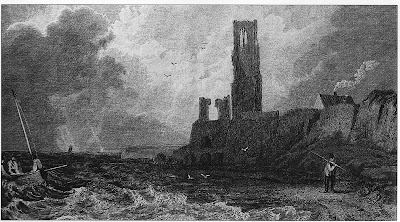 The miniatures are models of buildings that once stood along the East coast of England. As a result of coastal erosion the land beneath the buildings has been sucked away undermining their structure and leading to their demise. The miniatures reflect upon how one might react to such objects and how often our reaction may be to romanticise and fetishise that which no longer exists.
These miniatures, however, rest in an uneasy place between a longing for what is lost and the reality that what is lost would no longer function for its original purpose.
Walter Benjamin described how contradictory elements could come together revealing a dialectical image in their wake, these miniatures can be read dialectically, with the polarities of past and present, the homely and the uncanny, the fashionable and the unfashionable. These polarities play themselves out within the models presenting an image of the past in its uneasy place within the present.

*Image from The People along the Sand. Jan Crowther (Phillimore 2006) 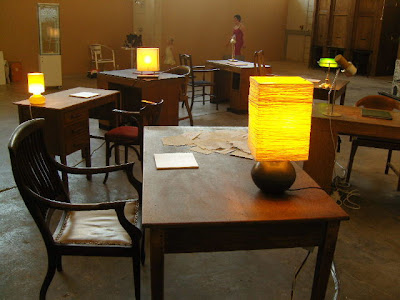 In the three perspectives of correspondence, Diana Ali’s work involves a fictionalized character. She writes back to junk mail and actual people crossing over an adopted persona and a sense of self exposure as well as self concealment. There is a critique of the junk mail, the act of correspondence and the impersonal with the personal through a play of humour. The slight absurd gesture takes away from the everyday of receiving such mail but plays on the romantically high whilst involving an internalized duality and inordinately being exposed to the gaze of others. The viewers are invited to read the books of correspondence and open the private hidden envelops by gathering in a collective reading area but absorbing in a pseudo intimacy. 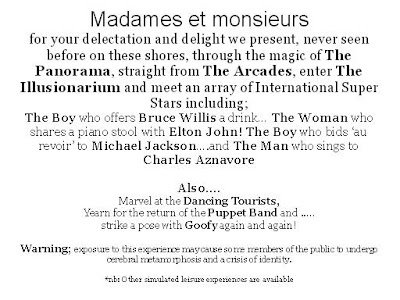 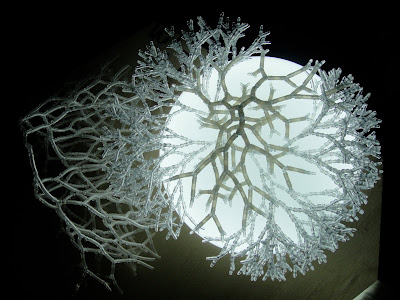 In general my artwork aims to raise questions, and leave them briefly floating in a pool of sensation.
This work consists of three separate short poetic lecture/performances, delivered by me to transient sculptures on wheels, and a fourth video piece.
It reflects my current interest in art that is nomadic, horizontal and based on event rather than being rigidly installed 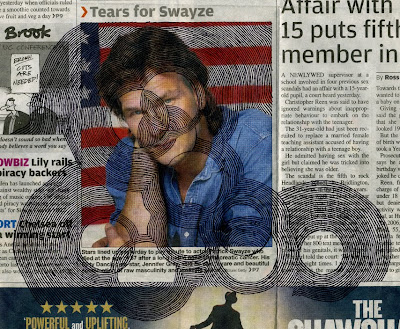 The defacement of obituary images serves to reveal the mystery of the lives they represent, to transgress the boundaries between our world and another and perhaps add meaning where words fail. Dead images are fertile ground, they come back to life as reincarnations, or perhaps more accurately, as zombies which are things neither living nor dead. To the anthropologist, Michael Taussig, the face is the main focus of this kind of work, he describes it as a ‘contingency, at the magical crossroads of mask and window to the soul, one of the better-kept public secrets essential to everyday life’ , this public secret is most pronounced in a staged or formal portrait, and is taken a step further when the image is used in a public item like an obituary. Some are literally ‘defaced’, their faces removed and turned into badges. The public secret of death and mourning is being played with and by covering, arranging and removing is somehow opened up or exposed.

An Essay by Lisa Murphy

Endgame is the subject of reaching the door.

It is a reference to the last part of a chess game, when there are very few pieces left.

With the outcome usually inevitable, memorized actions a mere formality for experienced chess players, and the player with the advantage coming into the endgame will almost always win.

For others, the joy in the game lies in the elegant moves that resist the domination of the opponent; the strategies involved in creating a lack of solution and in playing to end in a draw.

These type of endings were favoured by Marcel Duchamp, a chess master, as he believed they reflected an understanding of the conceptual riddle that he identified in art as in life,

“I am still a victim of chess. It has all the beauty of art—and much more. It cannot be commercialized. Chess is much purer than art in its social position” [1].

Whether he gave up on his career as an artist to be a professional player or he simply thought of chess as a form of art in itself, his devotion to the abstract, poetic nature of the game is evident throughout his works and the legacy of their position in history. Year after year, we still struggling to articulate the progress achieved within the uncertainty of what will be gain.

In his play Fin de Partie, Samuel Beckett draws a similar parallel between the final moves in chess and those in life (the French title applies to games besides chess and apparently Beckett lamented the fact that there was no precise English equivalent) [2]. The characters (or players) enact repetitive rituals that are part of their endgame, exposing the ways we covet endeavours that are meaningless and while away time before the inevitable outcome. The opening lines repeat the word "finished".

The scene of the play is described more than once as a "shelter”. The setting is a bare interior stranded between darkness and light. There are two small windows with drawn curtains, a door, and two ashbins covered by an old sheet. Beckett constructs the chess motif with movements on stage.

, who sometimes utters the cryptic line, "Me to play," is the King, the most powerful and yet the most vulnerable piece on the board. His movement is restricted, and he relies on Clov, who might be considered the Queen or Knight, for protection in the center. Nagg and Nell depend on for food and are relatively valueless Pawns, appearing only when the King allows it.

Each holds the remains of a kind of dream or aspiration that they try in vain to communicate to the others. All movement has slowed down amid the continuous questions and answers. Everything outside is "zero". The drama is the lack of meaning, which the spectacle of life provides and which is offered to the spectators (although it may not be so comprehended by the characters in the play).

The tragedy of the situation is offset by the almost farcical tone amid the cyclical, inescapable reality.

While Beckett is associated with the Theatre of the Absurd, which proposed that life was beyond human rationality and meaningless, his interests lay in our failure to overcome “absurdity” and he disagreed with the movement’s intentions and the limitations it imposed,

After a long pause:

'You have to work in an area where there are no possible pronouns or solutions, or reactions, or standpoints - that's what makes it so diabolically difficult.” [3].

For most of us, when we go to a gallery or exhibition the mode of experiencing the artwork is something like assessment and contemplation. A select few are also shopping. We pause to judge the artist’s position and strategies, reconsider our own before we move on. As in Grandville’s imagery, the need to accumulate is a cruel game but one that draws us in again and again. Another opening awaits as a closing begins.

The artists works featured in this Endgame playfully summon hope and desire through what has already passed. Intricately constructed from disparate found and gathered materials, time finds form in weathered timber and stone, disregarded correspondences, biomorphic assemblages, tourist pilgrimages and printed announcements on the recently departed. Here we are witness to the echoes of memories.

Recollections are accorded a place through the presence of drawings, structures, buildings and books - mute witnesses to some abstract yet symbolically valuable past-ness. The mechanisms of illusion are conjured up before us, whether to reveal what it hides or simply to draw attention to its own ubiquity. Re-creations simultaneously person and place, construction and wreck, motion and rest.

An exhibition creates a dialectical space, with traces of life and death as apparent in the artworks themselves as in the spaces they temporarily inhabit. Remnants mutate to create something new, even when the point of doing so sometimes remains unclear.

For all its accommodations and critiques of commodity capitalism and despite the futility, we are here again because we enjoy it. We may be caught in the impossible absurdity whereby the "purpose" of art must be to destroy art, so that all may join in. We play towards an end that no one will win but the game will be played again tomorrow. In some ways, nothing makes better sense than the attempts of the (art)world to gorge upon itself. The aim however is not to destroy the space of creativity but to open it up.

We don't want to leave; we want finally to arrive.

“My work is a matter of fundamental sounds (no joke intended) made as fully as possible, and I accept responsibility for nothing else. If people want to have headaches among the overtones, let them.

And provide their own aspirin.” [4]

(This page was last modified on at ). Available at: http://en.wikipedia.org/wiki/Endgame_(play) 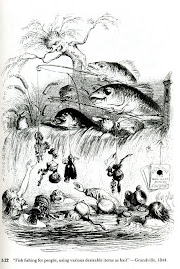